Cuneiform tablets list the reigns of between eight and ten kings who are thought to have ruled in Sumeria before a flood approximately 20,000 years ago. These kings are associated with a number of ancient Sumerian cities. Analyzing the visible remains of these cities and other ancient sites in Mesopotamia reveals approximately fifty sites and/or structures within sites are aligned in directions that reference previous locations of the North Pole. Interpreting the alignment of the sites in the context of Hapgood’s theory of earth crustal displacement suggests a far more ancient dating of their origin from thousands of years old to between 20,000 and 130,000 years old depending on alignment. All five of the antediluvian cities contain structures aligned to previous (i.e., pre-flood) poles. The cities associated with the earliest rulers are aligned to the older Greenland pole, while cities associated with later rulers are aligned to the more recent Hudson Bay pole.

Working backward from a table of the Sumerian King List, the beginning of the Kish dynasty can be dated to approximately 20,580 BCE. Using the chronology from WB 444, a list of eight kings goes back over 240,000 years before the flood. Berosus’ timeline goes back even farther to 432,000 years. Because such ancient timeframes are orders of magnitude longer than currently acceptable historical periods that start with Gobekli Tepe, which is considered by mainstream archaeologists to be the oldest archaeological site discovered to date, most scholars believe that the antediluvian kings were either mythical figures or their reigns somehow must have been shorter.

Pole Shifts, Floods and Other Disasters

The beginning of the Kish dynasty is around the time that the North Pole is thought to have shifted from its previous location near Hudson Bay in Canada to its current location in the Arctic. Rapid displacement of Earth’s crust over the mantle would likely have resulted in worldwide floods, earthquakes, and other disasters at that time. That a catastrophe affected this part of the world  is supported by the Epic of Gilgamesh (Kovacs 1989):

Enlil assigned (Humbaba) as a terror to human beings,
Humbaba’s roar is a Flood, his mouth is Fire, and his breath is Death!
The ground split open with the heels of their feet,
as they whirled around in circles Mt. Hermon and Lebanon split.

Six days and seven nights
came the wind and flood, the storm flattening the land.

According to Bůčková (2004) deluge is one of the most widespread mythical motifs throughout the world. She explains how in the Maori mythology of the aboriginal people of New Zealand, their hero Tawhaki took his warriors and built a protected village upon the top of a mountain. It was here that Tawhaki called to the gods for revenge and the flood they let down was so disastrous that the whole earth was covered by water and all human beings perished.

Vigato (2015) proposed that the pyramid of the feathered serpents at Xochicalco in Mexico is a monument erected to commemorate the mythical ancestry of the lords of Xochicalco, descendants from a company of gods that were the sole survivors of a cataclysm that destroyed and sunk their primeval homeland.

In Plato’s dialog Timeus, the Egyptian priest tells Solon that “there have been, and will be again, many destructions of mankind arising out of many causes.”

Alignments of the Cities of the Antediluvian Kings

Shuruppak – Although there are no above surface structures at Shuruppak, known today as Tell Fara, excavations by Schmidt (1931) revealed evidence of a flood between the two lowest strata at the site. 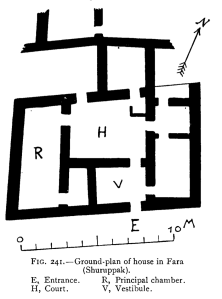 Nothing shows more conclusively than these ground-plans the immense age of Babylonian civilisation; for even in this remote period, which is in part prehistoric, they give clear indications of a yet earlier development from a presumably simpler and more primitive building.

If we rotate the ground plan 22.5° counter-clockwise direction so that the arrow points up, the house would have been aligned in the direction of the North Pole when it was in Hudson Bay between 20,000 and 65,000 years ago.

Sippar – According to Berossus (Burstein 1978), records of the civilization that existed in Mesopotamia before the flood were buried at Sippar:

Cronus appeared to Xisouthrosso in a dream and revealed that on the fifteenth day of the month mankind would be destroyed by a flood. Therefore, he ordered Xisouthros to bury the beginnings and the middles and the ends of all writings in Sippar, the City of the Sun.

After the flood “when these people came to Babylon, they dug up the writings at {the city) of the Sipparians and founded many cities and rebuilt shrines and founded anew Babylon.”

Thousands of clay tablets were discovered in Sippar in the late 18th century.  What remains of this the northernmost of the ancient cities on the east side of the Euphrates River is not aligned in any known astronomical direction (i.e., relative to the current geographic pole). As shown in the figure to the right, Ebabbar, the temple of Shamash (dedicated to the Mesopotamian sun god) and the adjacent ziggurat appear to be aligned in the direction of the summer solstice sunrise/winter solstice sunset relative to the Hudson Bay pole. 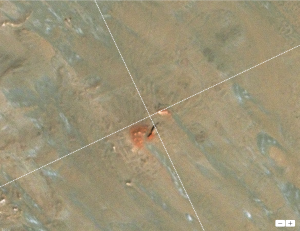 Eridu –  By association with the earliest kings, Eridu along with Babylon are the two most ancient of the antediluvian cities. A site known as the “palace” at Eridu (below left)  is aligned in the direction of Greenland, which according to our timeline is thought to have been the location of the North Pole 85,000 – 130,000 years ago. What remains of the ziggurat to the south of the palace (below right) appears to be oriented in the general direction of the summer solstice sunrise/winter solstice sunset relative to a later pole in Hudson Bay pole.

Babylon – Robert Koldewey’s 1914 book The Excavations at Babylon describes more than a decade of work in uncovering, documenting, and analyzing the ruins of this historic city.

At the north is Babil (B), the remains of one of Nebuchadnezzar’s palaces, which is inside the outer wall of the city (AS). South of Babil was Nebuchadnezzar’s castle (Kasr or Qasr). The principal entrance to the Kasr (K) is through the 12-meter tall Ishtar Gate. Although the internal layout of the Kasr is cardinally aligned the surrounding walls are not. According to Koldewey, the foundations are so deep that, owing to the high water level at the time, they were unable to reach the footings. The wall north of the Ishtar Gate appears to be very closely aligned with the Greenland pole while the wall south of it appears to be very closely aligned with the Norwegian Sea pole. The orientation of the Ishtar Gate itself lies in between these two directions. While most of the city was constructed of mudbrick, Koldewey found a section of the western wall consisting of four courses of immense limestone blocks bound together with dove-tailed wooden clamps. Many of the structures to the south of Kasr on the mound known as Amran (A) excavated at the time are no longer visible in Google Earth imagery.

Registering a more detailed ground plan of this part of the city reveals that besides the Ziggurat of Etemenanki (ET) also known as the Tower of Babel, whose foundation still exists, the Esagila or Temple of Marduk (ES), to the south appear to be aligned in the direction of the Greenland pole. Structures further south may be also aligned in the same general direction. Like Eridu, based on their alignment to the Greenland pole we hypothesize these two cities were originally established 85,000 to 130,000 years ago.

Credit: The featured image for this article is a depiction of Babylon by Austen Henry Layard.

Carlotto, Mark (2020b) “An Analysis of the Alignment of Archaeological Sites,” Journal of Scientific Exploration, Vol. 34, No. 1.

Finkelstein, J.J. (1963) “The Antediluvian Kings: A University of California Tablet”, Journal of Cuneiform Studies, Vol. 17, No. 2.

Vigato, Marco (2015) “The pyramid of Xochicalco: A monument to the end of times,” http://unchartedruins.blogspot.com/2015/07/the-pyramid-of-xochicalco-monument-to.html

5 Replies to “The Cities of the Antediluvian Kings”